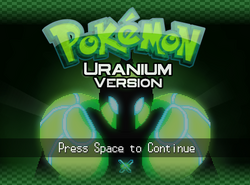 Pokémon Uranium is a fangame developed using Pokémon Essentials. It was originally developed by Involuntary Twitch and JV, but they have passed development to a new team.

Pokémon Uranium takes place in the lush, diverse Tandor region, home to over 150 new and unique species of Pokémon. Tandor is known for its world famous Tandor Regional Championship, where Trainers from all across the Pokémon world compete for the honor of being crowned Champion. In order to qualify, they must first collect all 8 Gym Badges from various towns and cities across the region.

The hero, a teenager who grew up in Moki Town, begins their adventure reluctantly. After their mother Lucille disappeared ten years ago in a nuclear catastrophe, their father Kellyn, the top Pokémon Ranger in the Tandor Ranger Union, left them to grow up with their elderly Auntie in Moki Town. Now that they are grown up, they leave home to do what so many young people do and take up Pokémon Training as an occupation.

Professor Bamb'o, the regional expert on Pokémon elements, has been looking for a trainer assistant to travel the region and gather specimens of the varied wildlife. The main character volunteers, along with their rival, a younger boy named Theo. After taking a test and receiving their starter Pokémon, they head towards their first gym challenge in Nowtoch City, and take their first steps exploring the Tandor region.

Things aren't as sunny as they first seem, though. Just when the accident ten years ago had been all but forgotten, new mysteries emerge. A new power plant is built over the site of the old one. Kellyn begins acting strangely, journeying to the far reaches of the region and questioning whether the main character's mother is really deceased. Sinister Pokémon, corrupted by nuclear radiation, threaten innocent people. In the midst of the turmoil, it seems that an impending disaster is looming over Tandor...and there might be only one person who can prevent it.

The Pokémon of Pokémon Uranium have their basis in a number of various mythologies all throughout history and the world, including the three-legged crow, the Wolpertinger, and space creatures! Pop culture makes its way into some designs as well, with inspiration being drawn from Daft Punk and Hatoful Boyfriend.

Pokémon Uranium also introduces the Nuclear type, a type that is both super-effective against and weak to all types. Though Nuclear-type Pokémon tend to have the type due to corruption, some Pokémon have it naturally, such as the new Eeveelution Nucleon or the game's main legendary Urayne.

The full version Pokemon Uranium was released on August 6, 2016 after nine years of development but was taken off the official site soon after receiving multiple DMCA takedown notice letters from Nintendo. On September 21, 2016 the developers announced that all support for the game will be discontinued. The unofficial developers have now taken over development of the game and continue to run the online servers.

Add a photo to this gallery

Retrieved from "https://pokemon-fan-game.fandom.com/wiki/Pok%C3%A9mon_Uranium?oldid=751"
Community content is available under CC-BY-SA unless otherwise noted.