Pokémon Stadium (not to be confused with the official N64 game of the same name) is a bootleg game for the SNES and Genesis.

In Pokémon Stadium, Pokémon fight in turned-based 1v1 battles. Each Pokémon has 4 attacks, with the first one being the weakest, but costing the least energy, and the last being the strongest and costing the most. When being attacked, the Pokémon can either evade or defend. Defending is luck based and will only reduce the damage taken, while evading brings up a slider, and if you stop in the center, the attack will be avoided.

You can press B to taunt in the SNES version, but that feature is absent in the Genesis version.

Pokémon Stadium has 9 canon Pokémon that appear in both versions. These Pokémon are: Jolteon, Koffing, Beedrill, Abra, Gengar, Charizard, Blastoise, Pikachu, and Diglett. Most of the Pokémon look slightly different from their official artwork due to the game being a bootleg, and have different names which seems to be their Japanese names but shorten to fit 5 characters (i.e. Jolteon is Thund,Beedrill is Spia,etc.)

The SNES and Genesis versions have slight differences, the most prominent being the different Pokémon. Pokémon exclusive to the Genesis version include: Arcanine (Windy), Gyarados (Galas), and Snorlax (Kabic), while the SNES exclusives are: Vileplume (Raif), Jigglypuff (Pulin), and Mewtwo (the almighty Mu). Other differences include graphics and performance with the Genesis having some graphical improvements, but the arcade mode doesn't work properly, going back to the title screen after the first fight. 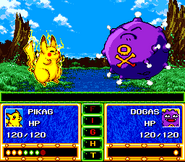